Founded in 1947 by Jack Fox and Martin Locke, our historic grocery has been in continuous operation for 75 years and counting. It was originally located across the street, but quickly outgrew its first home and moved to this larger building in 1955.

HOME OF THE
FOX & LOCKE FAMILY

Fox & Locke General Merchandise Store was the largest in the area, serving as a central meeting place for this rural community. Folks would stop in for gas, groceries and snacks; they’d stick around for the friendly banter and grapevine news.

The Puckett family bought and renamed the grocery in 1960, and the store continued to serve the surrounding area for decades under various owners.

Everything changed when live music came to the grocery in 2002, attracting songwriters, artists, and visitors from around the world. Today, our Thursday Open Mic Night is the stuff of legend, considered by up-and-coming musicians as the unofficial gateway to Music City.
Fox & Locke had no idea their little country store would someday be known as a top-shelf music venue, but they knew how an authentic, friendly gathering spot can create a tight-knit community.

In 2022, we are proud to return the heart of Leipers Fork village to its roots by honoring its original name, Fox & Locke.

Located at Veterans Park just one mile south of I-22, Exit 87, the memorial is a permanent 300’black granite replica of the wall in Washington, D.C. inscribed with 58,267 KIA’s and MIA’s of the Vietnam War.  For more information, visit www.Tupelo.net.

Built circa 1929, The historic Factory is  a complex of 11 depression-era factory buildings which have been renovated into one of Tennessee’s most unique shopping, dining, and entertainment venues!  Restaurants, antiques shops, art galleries, one-of-a-kind retail stores, theatre, working artisans, farmers market and much more.

GROUPS: Groups enjoy The Factory as a shopping stop with lunch or dinner at Mojo’s Tacos or MAFIAoZA’s Pizzeria & Neighborhood Pub.

The Lotz House is TripAdvisor’s No. 1 rated attraction in Franklin. Lotz House is located in the heart of downtown Franklin at “ground zero” for the Battle of Franklin, which was a pivotal battle in the Civil War on November 30, 1864. The house was built in 1858 by German immigrant Johann Albert Lotz. By trade, Mr. Lotz was a master carpenter and a piano maker.  His home, served as his “show house” to demonstrate his carpentry work to potential clients interested in hiring him for his services. There are also several battle scars including the charred rounded indention in the wood flooring where a cannonball flew through the roof, the second story bedroom and landed on the first floor and rolled. Incredible antiques throughout including John Henry Belter furnishings, Old Paris Porcelain and relics from the battlefield.

In 1830, Fountain Branch Carter built a brick farmhouse just south of downtown Franklin for his small family. On November 30, 1864, the Battle of Franklin raged across the fields south of town, scarring the landscape, claiming the lives of thousands and changing life on the Carter Farm forever.

Fountain Branch Carter’s son Tod was mortally wounded in the battle just southwest of his childhood home where he died two days later.

Carter House (and Carnton) are open daily for guided tours. The guided tour at each site lasts approximately one hour, and it’s recommend spending an additional 30 to 60 minutes exploring the grounds and outbuildings.

On November 30, 1864, Carnton was witness to one of the bloodiest battles of the entire Civil War. Everything the McGavock family ever knew was forever changed.

Carnton was built in 1826 by former Nashville Mayor Randal McGavock (1768-1843). Throughout the 19th century, it was frequently visited by those shaping Tennessee and American history, including President Andrew Jackson. The Battle of Franklin lasted barely five hours with the majority of the combat in the dark of night and at close quarters. This led to some 9,500 soldiers being killed, wounded, captured or counted as missing. Nearly 7,000 of that number were Confederate troops. Carnton served as the largest field hospital in the area for hundreds of wounded and dying soldiers.

Carnton (and Carter House) are open daily for guided tours. The guided tour at each site lasts about an hour and we recommend spending additional time exploring the grounds & outbuildings. Tours include grounds, gardens, outbuildings and access to the museum store.

There’s a reason the heart of this storybook town has been designated a Great American Main Street and is listed on the National Register of Historic Places.

Located just 17 miles south of Nashville, Franklin is a place that offers a getaway from the expected. This gem that runs through the heart of a 16-block historic district preserves Franklin’s southerly heritage, yet radiates a sophistication that’s inspiring and inviting while brimming with history, music, shopping, and of course Southern hospitality.

Explore the Masters & Makers Trail that winds through the scenic beauty of the Williamson County countryside that bore witness to history and has produced the cherished traditions passed through the generations. Along the trail visit with the masters of making wine and spirits at the county’s winery and distilleries. Immerse yourself in the culture while savoring the distinct, locally made flavors at multiple stops that dot the more than 70 miles of the Masters & Makers Trail. Pick up your Masters & Makers Trail passport at any location or sign up for the free digital passport, visit four out of the five stops on the trail, and turn in your stamped passport for a free t-shirt at the Visitor Center in downtown Franklin!

A visit to The Spa at Leiper’s Fork is a chance to recharge your spirit and reignite wellness in a place that takes you back to a simpler time, if only for an afternoon. Our tailored treatments incorporate products created exclusively for our guests, blending cosmeceutical ingredients with innovative alchemy. Customized to respond to the individual needs of each guest on that day, no two treatments are ever the same. Unplug, decompress and emerge with a new sense of wellbeing. You’ll come for an hour, but you’ll stay for the day.

Hugh Ellard Park is located less than 2 miles from the Natchez Trace Parkway at 100 Love Road and just off the historic original Trace that leads through Kosciusko.

You’ll find an expansive baseball and softball complex consisting of 9 fields that are utilized by all ages and tournaments throughout the year, 3 concession stands, batting cages and a walking track with exercise equipment on the grounds. You’ll also find a large soccer complex that has fields for all ages along with a concession stand. Plenty of parking for daily use or picnics.

Jason Niles Park is located on Knox Road less than three miles from the Natchez Trace and offers beautiful scenery as well as a walking track, playground equipment, tennis courts, picnic area, a splash pad for those hot days of summer and a challenging 9 hole Disc Golf Course that winds its way throughout the park. 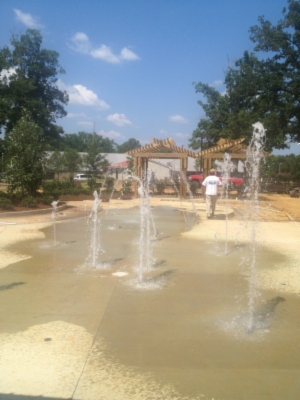 The Tupelo Visitors Center is the perfect starting point for any trip to the city where anything is possible.From interactive exhibits that highlight the city’s top attractions and a collective timeline of Tupelo’s rich history, to displays focused on Elvis’ childhood in Tupelo as told like never before, the Tupelo Visitors Center will full prepare visitors for exploring this unique, southern town.

The center displays little known facts about 3-country region known as “Hill Country” whose culture is heavily influenced by the intersection of the Applachian Region and the Mississippi Delta.