Icon Entertainment Group, the parent company for both the Johnny Cash Museum and Patsy Cline Museum, is busting with joy this holiday season with the acknowledgement that their “glossed” and “new” museums helped secure Nashville the #8 spot on National Geographic’s “The Cool List 2018”. This spotlight came just a few days before Toronto, Canada couple Jackie and Tony Seccombe became the Johnny Cash Museum’s one millionth customers.

“The 2017 holiday season is especially bright this year as we reached a monumental one million guests in just over four and a half years at the Johnny Cash Museum,” says Founder Bill Miller. “The Seccombe’s are proof that Johnny Cash continues to have an international impact on fans across the globe. Within the same seven days to see both the Johnny Cash and Patsy Cline Museums highlighted in National Geographic’s ‘The Cool List 2018’ is an astonishing accomplishment and we’re proud of the team that we have at Icon Entertainment Group.”

National Geographic’s “The Cool List 2018” highlights 18 destinations that the publication expects to “make it big” in 2018. Nashville was listed #8 on the list with the publication stating, “Like famous former resident Taylor Swift, Nashville has glossed itself up in recent years, with new museums devoted to Patsy Cline and Johnny Cash…” To read the full piece, click here. 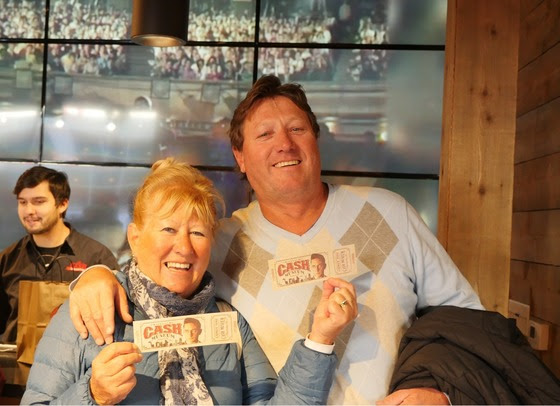 At 1:55 PM CT on Tuesday, December 12 Jackie and Tony Seccombe of Toronto, Canada purchased the one millionth (and one million and one) ticket to the Johnny Cash Museum. The couple was presented with a gift bag full of more than $100 of Johnny Cash Museum merchandise and a pass that will guarantee them two adult admissions to the museum anytime they visit throughout 2018. In addition, the one millionth ticket and a photo of them is currently being framed and will be presented to the Seccombe’s.

Icon Entertainment Group, the parent company for The Johnny Cash Museum, also owns and operates Nudie’s Honky Tonk and Skull’s Rainbow Room. It was recently announced that a Merle Haggard museum and restaurant will be among their award-winning offerings in the summer of 2018.

To receive additional information or to schedule an interview with founder Bill Miller, contact Mark Logsdon of PLA Media at (615) 327-0100 or mark.logsdon@plamedia.com.