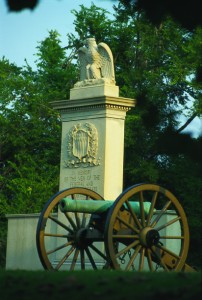 Commemorated in a park on Tupelo’s West Main Street is the Battle of Tupelo – the last major engagement of the Civil War in Mississippi.

The battle, which raged over two hot July days in 1864, was among the bloodiest in the state. Coming after the Confederate victory at the Battle of Brice’s Crossroads, the Tupelo engagement pitted troops under Confederate Generals Stephen D. Lee and Nathan Bedford Forrest against Union troops under the command of General A.J. Smith. At stake was Smith’s ability to keep Forrest’s feared cavalry corps in north Mississippi and not allow him to go to east Tennessee and disrupt Union General William T. Sherman’s “march to the sea” campaign in Georgia. So important was Tupelo to Sherman that he ordered Smith in Memphis “to make up a force and go out to follow Forrest to the death, if it cost 10,000 lives and breaks the Treasury.” Although the blue clad troops claimed victory, insufficient supplies caused the Union army to retreat to Memphis, leaving the field to an army half its size.

The Tupelo National Battlefield is open daily and maintained by the National Park Service. The site includes a cannon, a marker with text and maps outlining the engagement.